What do Land Rovers, the world land speed record and Tongan postage stamps have in common?

They are all being worked on in Enterprise Zones across the country.

It’s only four years since the Government created Enterprise Zones and there are already nearly 19,000 people who work in one. More than 540 firms, from creative start-ups to aerospace giants, are reaping the benefits of the reduced business rates, simplified planning rules and superfast broadband that Enterprise Zones offer.

Building on this success, the Government recently urged local councils and Local Enterprise Partnerships (LEPs) across the country to submit plans for new Enterprise Zones – the deadline was last week.

Over the last four years, the HCA has worked alongside councils, LEPs, developers and other local partners to invest more than £120m in Enterprise Zones.

As a landowner and investor, this funding has formed part of a broad package of incentives and support from across Government, supporting economic growth and regeneration in local communities.

Each zone is designed to match the skills and ambition in that area. This means that the 25 zones (including Plymouth, which was announced in August) are hugely diverse in scale and industry focus – from pharmaceutical to creative technology, automotive to aerospace.

But what exactly goes on behind closed doors? Here are 10 things you didn’t know about our innovative and brilliant Enterprise Zones:

1. Bristol’s Temple Quarter Enterprise Zone is home to Crux Product Design, a company that created helmets for the Olympic British cycling team – you might have seen them flying around the Velodrome during London 2012.

2. The Humber Enterprise Zone is the largest in the UK, covering the equivalent of 802 football pitches. It’s helping to establish the region as the UK’s ‘Energy Estuary’, with 80% of all North Sea wind power zones and 60% of the entire European market (2020) within 12 hours sailing time.

3. In the heart of Cornwall’s aerospace enterprise zone lies The Bloodhound Project, a team that’s developing a 1,000mph supersonic car to break the World Land Speed Record. They are planning a runway test next spring, ahead of a world record attempt in South Africa.

4. This month, a new 63 metre steel bridge launched in Temple Quarter Enterprise Zone to connect Bristol's brand new 12,000-capacity Arena to the rest of the city. This was commissioned and funded by the HCA as part of our wider investment in the Temple Quarter Enterprise Zone.
Watch it being constructed in just two minutes in this timelapse video

5. In the Black Country Enterprise Zone, a brand new factory has just opened next door to Jaguar Land Rover. International Security Printers (ISP) is a specialist stamp printing company that produces postage stamps for 180 countries around the world. Their first stamp was for the Pacific Kingdom of Tonga.

6. When a Bristol mum was struggling to manage her diabetic son’s nutritional needs, she searched for an app that would help.

When she couldn’t find one, she decided to create it herself and, with the help of a business incubator based at Temple Quarter Enterprise Zone CookandCount was born. In just one year, she's sold more more than 2,000.

7. The former HMS Daedalus site in Hampshire has become part of Solent Enterprise Zone. With more than £40m of HCA and other public sector investment, this former airfield port is now a thriving engineering centre, set to create 3,000 new jobs.

8. Sitting at the heart of Northampton Waterside Enterprise Zone is Carlsberg. The beer giant has invested £60m in the Northampton site over the last four years and it is now their main production location in the UK. Their bottling plant can produce a staggering 60,000 bottles of beer per hour – that’s ten million per year at full capacity. 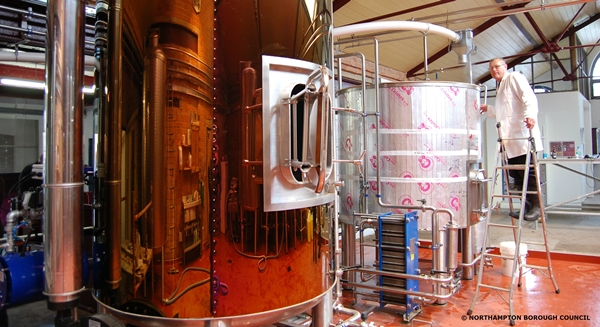 Next year sees the launch of the £43m Factory 2050, a glass-walled “reconfigurable factory” designed to meet increasing demand for advanced manufacturers to offer high levels of flexibility. It will be the first building on the a new campus that will enable Sheffield University to build up to a million square feet of new research facilities over the next 10 years.

10. If you’ve been to the Tate Sensorium in London you’ll have seen technology devised by Ultrahaptics, which uses ultrasound to project sensations through the air, directly to your fingertips. Based in Bristol’s temple Quarter Enterprise Zone, this innovative technology means you can ‘feel’ buttons without touching them, and interact with virtual objects merely by making mid-air gestures. They are now working with Jaguar Land Rover to investigate a mid-air touch system to prevent drivers taking their eyes of the road to physically touch a screen on the dashboard - clever stuff.

This is just a taste of the innovations that exist in England’s Enterprise Zones. What’s happening near you?

About homes and communities

As of June 2016 this blog is no longer being updated.
Providing insights and analysis on housing and local development. More about this blog.

Find out about current vacancies at the HCA.